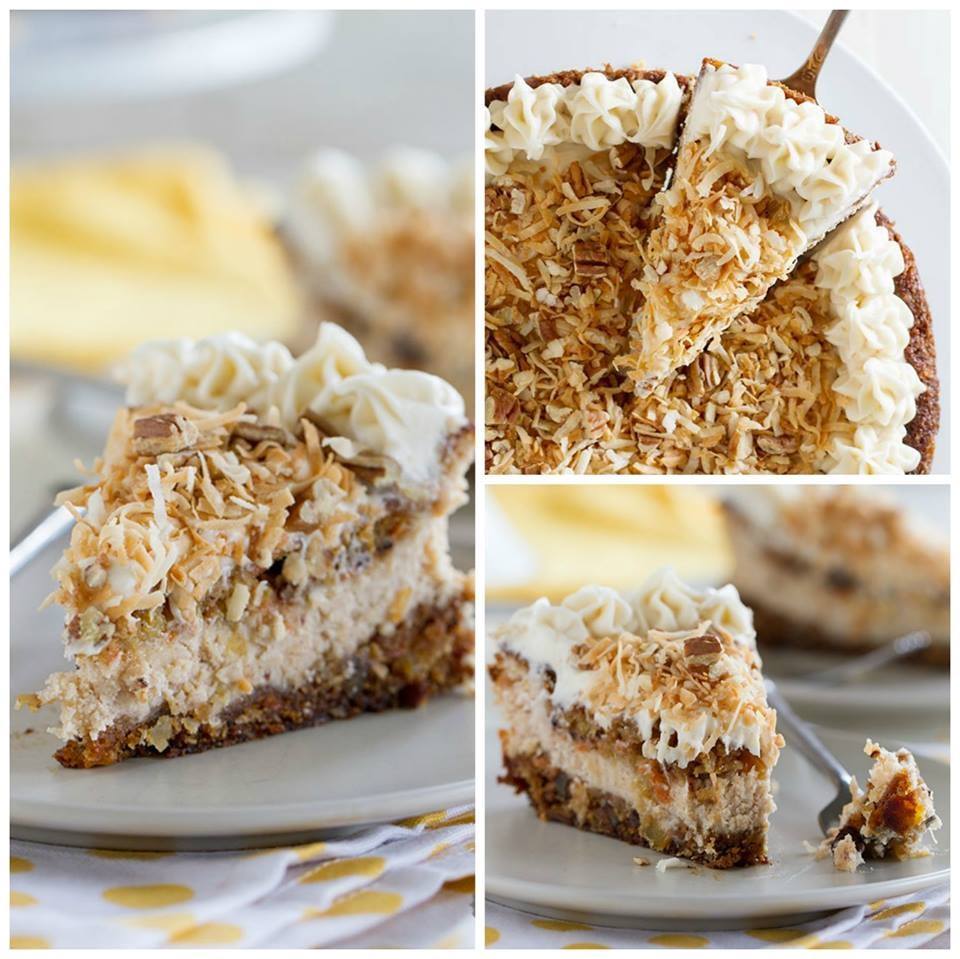 Preheat the oven to 350ºF. Grease a 9” springform pan and set aside. (If your springform pan is likely to leak, wrap the outside of the pan in foil.)In a mixer with the paddle attachment, beat the cream cheese, sugar and flour on medium speed until smooth, about 3 minutes. Scrape down the sides and add the eggs, one at a time, scraping down the sides of the bowl after each addition. Beat in the vanilla and cinnamon. Transfer the batter to a bowl and set aside.Combine the flour, baking soda, cinnamon, salt and nutmeg in a bowl and whisk to combine.Using the same mixer bowl that you used for the cheesecake batter, (no need to wash it)combine the sugar, eggs, oil and vanilla and beat to combine. Add in the pineapple, coconut and pecans and beat for 1 minute. Gently stir in the flour mixture. Stir in the carrots.Divide the carrot cake batter in half and pour one half in the bottom of the prepared springform pan. Bake the cake just until the batter is set (it will not be cooked through), 18-20 minutes.Remove the pan from the oven and drop the cheesecake batter over the top by large spoonfuls. Use an offset spatula to spread the batter over the top of the cake. Drop the remaining carrot cake batter over the cheesecake batter by large spoonfuls. It’s ok if some of the cheesecake batter pokes through.Bake until a tester inserted in the cake portion comes out clean, 55-60 minutes. If the top of the cake starts to get too brown, cover with a piece of foil that has been sprayed with nonstick cooking spray. (The cake will come to the top of the pan and the cake will stick to the foil if it is not sprayed.)Let the pan cool for 2 hours, then cover the top with plastic wrap and refrigerate for at least 6 hours.Run a knife around the outside of the cake, then release the springform pan.In a medium bowl, beat the cream cheese and butter together until light and fluffy, about 4 minutes. Add the vanilla and beat to combine. Add in the powdered sugar, ½ cup at a time, then beat until light, about 3 more minutes. If the icing is too stiff, add a small amount of cream or milk to thin it out a bit. Frost the top of the cake with half of the icing, then use the remaining icing to pipe around the edges of the top of the cake. Fill the center with toasted coconut and toasted pecans.Serve immediately. Store any leftovers covered in the refrigerator.